authorised documentary from the Oscar-winning duo Daniel Lindsay and T. J. Martin (Undefeated) — opens with a piercing close-up of Tina Turner: her brown eyes staring down the barrel of the camera; pursed lips, coated in brick-red lipstick; a wind machine gently blowing through her iconic 80s-MTV hair.

“I think that image embodies the symbol.”

The close-up shot is an out-take from the video for What’s Love Got to Do With It — the mega-hit from the album Private Dancer, which saw Turner resurrected in her forties as a solo act who could fill stadiums worldwide.

Youtube What’s Love Got To Do With It won three awards at the 1985 Grammy Awards, including Record of the Year.

She’d been a pioneering R&B and rock ‘n’ roll artist across the 60s and 70s, working with her husband Ike Turner, whose physical and emotional abuse of Turner is well known. When she divorced him in 1978, he left her broke, with only her stage name.

Six years later, Turner was selling millions of records, and was finally free of Ike.

And yet, the film compassionately shows up the limits of the simplistic, celebratory narrative of the survivor who triumphantly sheds her past like an old piece of clothing.

“We come to realise that at the centre of all that is someone who’s still sort of making the choice to survive every day,” says Martin.

When the image of Turner returns in the final moments of Tina, “you’re looking at her eyes in a totally different way,” he says.

Black and white photo of Tina Turner and Ike Turner performing in 1965
The first 50 minutes of the documentary focus on Ike and Tina Turner’s relationship, and the abuse she suffered in it.( The film is an immersive and thoughtfully sculpted work of biography that sticks close to its subject. It is anchored by original interview tapes and a lengthy interview — very likely her last — that Turner, now 81, conducted with the two directors in her Zurich residence.

Martin says their approach to telling Turner’s story was informed by an unexpected discovery in their first meeting with her: they learnt that she suffers from a form of post-traumatic stress disorder.

“As she plainly told us, when thinking about Ike, he revisits her in nightmares, he comes back in dreams,” Martin recalls. Tina Turner and the Ikettes performing in a radio station in 1973
The documentary is filled with never-before-seen archival footage and images.(

“The more we got to know her, the more we realised, it’s not just the struggle with the past, it’s actually the struggle to come to terms with her own narrative.

“We thought that was the most interesting, and honest, take of Tina’s point of view of her own story, and that we’d never really seen explored in the many tellings of her story.”

Those many tellings include her silence-breaking interview with People Magazine in 1981; her 1986 memoir I, Tina, co-written by Rolling Stone journalist Kurt Loder, which also details her unhappy childhood in Nutbush, Tennessee, as the youngest daughter of a family of sharecroppers; the moving 1993 biopic What’s Love Got to Do with It, which launched Angela Bassett’s career; and 2018 Broadway show The Tina Turner Musical. Tina Turner and the Ikettes performing in a radio station in 1973
Tina Turner with her four sons in 1967.(

“We needed to tell her story, but we also needed to add something to it,” Lindsay says. “Otherwise, what’s the point of doing it?

“I think we also look at it like: How are we making a film? We’re not coming to this as journalists or academics necessarily. How do we make a cinematic experience?

“That’s what is so great about the documentary form. All of the other renditions of Tina’s life are told through other people’s voices. We wanted to lean in to her, to the materials that were used to tell those stories, from her point of view.”

This approach is complemented visually by the wealth of material that the filmmakers unearthed (assisted by lead archive producer Ben Piner), favouring intimate, never-before-seen images.

Tina Turner and the Ikettes performing on stage in 1976
Turner (pictured, performing with the Ikettes in 1976) was forced to revisit this painful era in her life many times in media interviews.( These include fuzzy Super 8 videos and candid black-and-white photos of Tina and Ike on the road in the early 70s — courtesy of a budding young music photographer named Bob Gruen — as well as private snaps taken by Turner’s long-time assistant, Rhonda Graam.

“She was an amateur photographer, so our fingers were crossed that maybe she has a few photos … Turns out that she had been shooting Tina throughout decades. Once we gained her trust, she started pulling out album after album after album, all organised by year and date,” laughs Martin.

Rightfully, considerable space is also given to celebrating Turner on stage, showcasing what Loder described as the “wallpaper-peeling power” of her energetic performances.

Tina Turner in a sparkly red dress performing energetically on stage in 1978
Turner initially struggled to secure a record deal, but became one of the best-selling recording artists of all time.( The tightly choreographed, highly sexualised stage show with the Ike and Tina Turner Revue was modelled on the comic book heroine Sheena, Queen on the Jungle and calculated to sell — and yet Turner’s huge voice and signature shimmies, high kicks and jerky dance moves also offered her freedom.

Tina suggests performing was always her escape, and we glimpse this ascendance in live footage.

Ike and Tina’s 1969 tour with the Rolling Stones is already immortalised in the Maysles brothers’ concert film Gimme Shelter, but Lindsay and Martin were able to access the Maysles’ archive and bring to light out-takes — including Turner dropping a blazing feminist speech in the middle of Aretha Franklin’s Respect that sends shivers up the spine.

Ike, meanwhile, hovers behind her in the shadows.

The singer Tina Turner with iconic 80s hair surrounded by two female dancers in leopard print, pink background
“Tina had a strong desire to be an actress,” says Lindsay.( Turner’s desire to speak about her life was “a very complicated thing,” says Lindsay.

“Tina chose to tell People magazine as a way to try to release herself from Ike, in her career, and be like, ‘I’m trying to get a record deal and I don’t want to be associated with this guy anymore!’

But as Turner resignedly says in her interview with the directors: “I had an abusive life, there’s no other way to tell the story.” 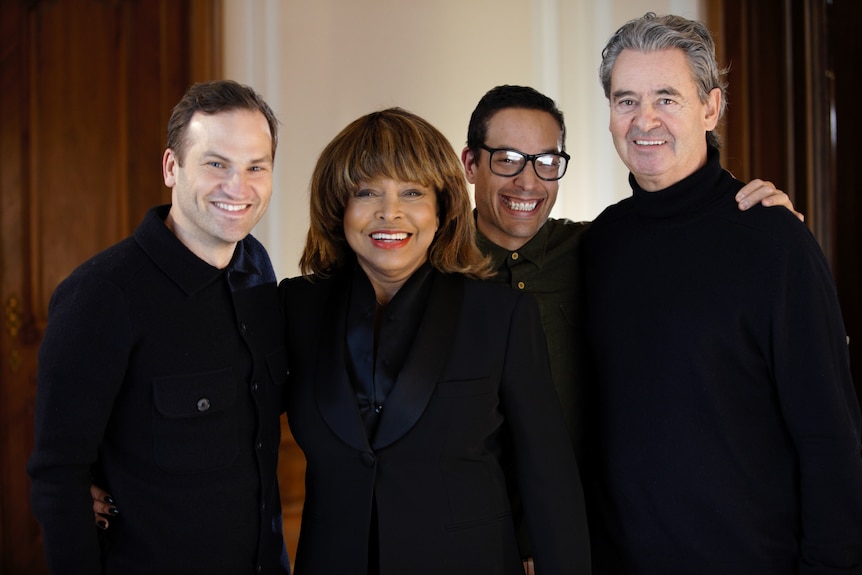 Lindsay and Martin were initially slow to sign on to the project. They’d just finished their documentary LA 92, about the uprising in Los Angeles following the Rodney King trial verdict.

“LA 92 is a really difficult film and it’s hard to live with that material for that amount of time. I think we thought, maybe at first, ‘Oh, this will be a little lighter,'” explains Lindsay.

“Obviously, that is not necessarily the case.”

Lindsay says he and Martin “also had reservations as two men telling her story”.

“But knowing that she was behind it, and she was on board with us doing it, and getting to know her, then for us it was like any film we do: we want to get to the truth of our quote unquote subject… to honour her as a person, instead of what we wanted her to be, or the idea of who she is to a lot of people.”

He says they wanted to tell her story in a way “that is illuminating something about us as people”.

“Rarely do we, as a society, look back at that person and empathise with what it’s like to go through that … to be asked every time you sit down for an interview, to recount some of the most harrowing and difficult moments of your life.”
The Australian connection

Stars symbolise different things to different people, and Australia has its own particular relationship with Turner.

While Australians will remember her bizarre appearances in NRL promotions in 1989 and 1990, these didn’t make the cut.
Youtube 1989 Tina Turner Rugby League promo

“Every Australian we would meet along the way was like, ‘Are you going to bring up the rugby?'” laughs Lindsay.

But there are flashes of her foray into the film world, namely her role as the majestic villain Aunty Entity in George Miller’s Mad Max: Beyond Thunderdome (1985) — dressed in a snow blonde hairpiece and a regal chain-mail dress soldered from dog muzzles, chicken wire and coat hangers that weighed 55 kilograms.

Tina Turner sitting down for an interview in new documentary
“One of the things she struggled with was getting roles that didn’t compartmentalise her as a Black woman,” says Lindsay.( 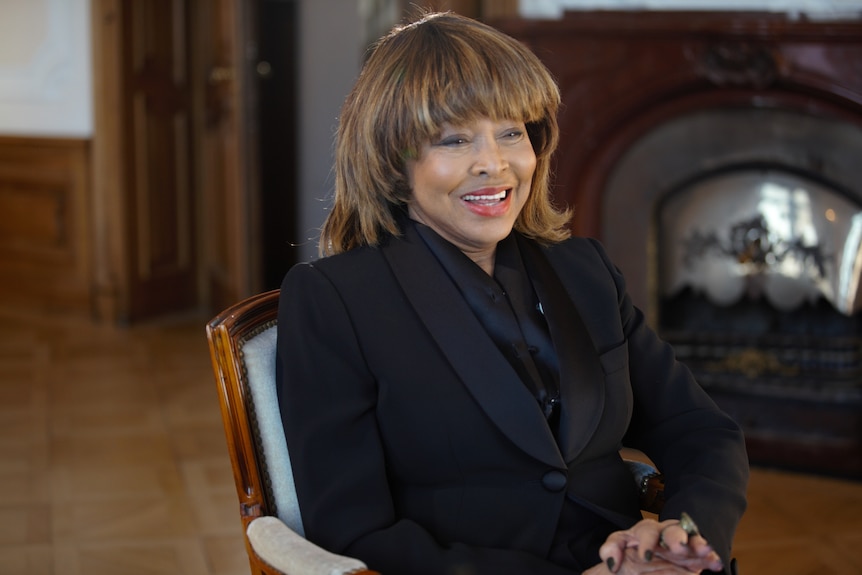 “Tina had a strong desire to be an actress,” says Lindsay.

“This was something we wanted to explore more, we just don’t have the running time — but I think if things had worked out the way maybe she wanted them to in the 80s and 90s, she would have segued from being a musical performer to being an actress.

“One of the things she struggled with was getting roles that didn’t compartmentalise her as a Black woman. She was always being offered roles as, like, a prostitute, you know?

“To finally be given a role as a powerful queen … I think if Hollywood had come at her with more roles like that, we would have seen more of Tina on screen,” he says.

Martin adds: “The crazy part is that as much as she’s suited for that role, it’s also this thing that continued to cement this notion of her becoming a symbol.

“That role has become not just iconic, but it feeds right into that same narrative. What has no chinks in its armour? Oh it’s Tina Turner.”

Turkey’s president on Saturday evening marked the holy night of Barat, also known as Lailat al-Barat which is regarded as the night of forgiveness and salvation

Sun Mar 28 , 2021
Turkey’s president on Saturday evening marked the holy night of Barat, also known as Lailat al-Barat, which is regarded as the night of forgiveness and […]