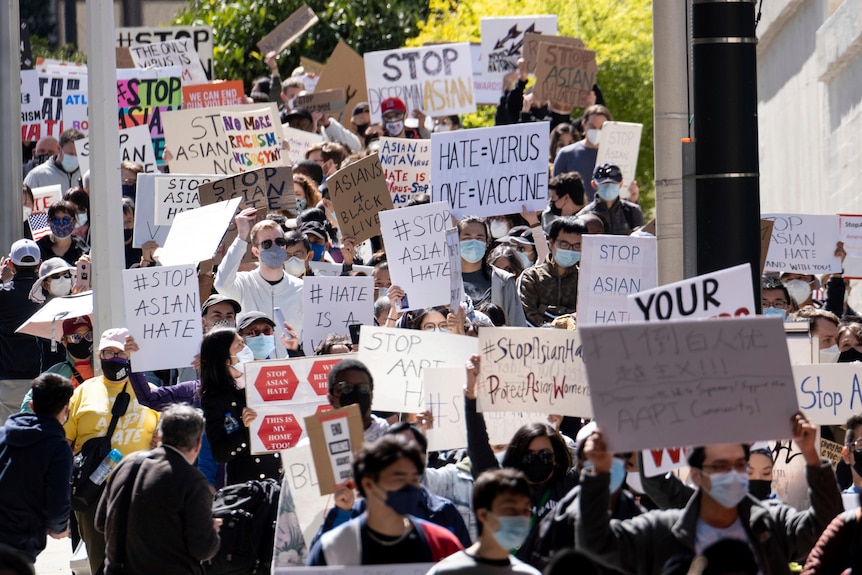 Hundreds of demonstrators have gathered in the US state of Georgia to show their support for the Asian American community, which has been rocked by three shootings last week which left eight people dead, six of them Asian women.

The killings at three day spas follow a year of mounting anti-Asian violence in the United States.

Community leaders say the increase is due to Asian Americans being blamed for coronavirus, first identified in China in late 2019.

On Saturday, crowds of people wearing masks, waving American flags and carrying posters that read “We are not the virus” and “Stop Asian Hate” stood in front of the golden-domed Georgia State Capitol building.

“I want to make sure the world and the people know that I am here and I am visible,” one demonstrator, Sunghee Han from Georgia, said.

“The women who perished … I see my family in them,” said Timothy Phan from Port St. Lucie, Florida, who drove eight hours to attend the event.

Georgia senators Raphael Warnock and Jon Ossoff, both Democrats elected in January, led the demonstrators in a moment of silence for the victims.

Georgia authorities are yet to determine the motive of the suspect charged with the killings at spas in and around Georgia’s capital, Atlanta, on Tuesday.

But US politicians and anti-racism advocates have said anti-Asian bias could have been at least part of the motivation.

“I’m not interested in whether or not he had a bad day,” said Senator Warnock, blasting a comment by an Atlanta-area sheriff’s department spokesman about Mr Long’s state of mind.

“No matter how you want to spin it, the facts remain the same,” Georgia State Representative Bee Nguyen told the crowd.

Some of the women killed were immigrants and mothers, described by family and friends as hard-working, loving and beloved.

Hyun Jung Grant was among those killed at Gold Spa in Atlanta.

Her son, Randy Park, set up a GoFundMe page to raise money for himself and his brother, who are alone now in the US while the rest of their family is in South Korea.

The shootings have prompted an outpouring of grief, from the local community in Georgia to the halls of US Congress.

Since Tuesday, mourners have piled flower bouquets and signs, lit candles and said prayers outside the spas where the victims were killed.

US politicians decried the spike in anti-Asian violence in a congressional hearing on Thursday, where Democratic representative Grace Meng, who is of Taiwanese descent, testified that the “community is bleeding”.

On Friday, US President Joe Biden and Vice-President Kamala Harris met with Asian community leaders in Georgia to express condolences and implore Americans to stand together against hate.

While many calls for the perpetrator of the shootings to be charged with a hate crime have focused on race, former Georgia district attorney Tom Morgan said it appeared the victims’ gender motivated the attacks.

“It’s a crime targeting women who worked in the sex industry.”

Georgia was one of only four states without a hate crimes law when local politicians quickly passed it last year.

That followed the killing of Ahmaud Arbery, a Black man pursued by armed white men last year, and national protests against racial injustice and police brutality.

Sun Mar 21 , 2021
Australia’s medical regulator has approved the domestic production of the Oxford-AstraZeneca COVID-19 vaccine, with the first batches expected to be released “in the next few […]