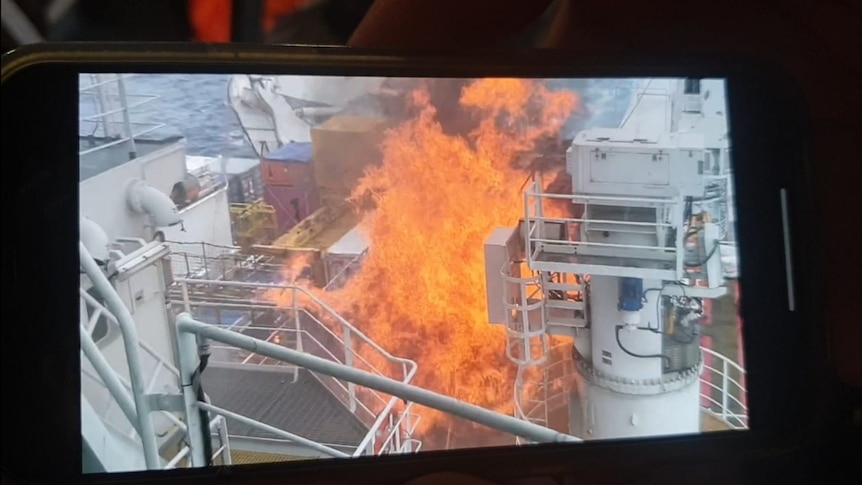 The first image of a fire onboard an Antarctic resupply vessel has emerged, with the stricken ship still days from reaching Australia.

The MPV Everest will instead dock in Fremantle, Western Australia, rather than Hobart, after a fire on Monday “engulfed” the port engine room and “destroyed two inflatable rubber boats stored on the deck”.

None of the 109 people among the expedition party and crew were injured in the incident, the Australian Antarctic Division (AAD) said in a statement.

The ship is operated by Dutch-based company Maritime Construction Services.

The AAD’s Charlton Clark said the captain of MPV Everest had “decided to head for the closest port”.

The ice-strengthened ship had just completed a two month voyage to Antarctica, resupplying and changing over personnel at Australia’s Davis and Mawson research stations.

The AAD said the fire started just after 2pm while the ship was on its return journey to Australia.

The Australian Maritime Safety Authority (AMSA) Response Centre is monitoring the transit of the MPV Everest and in regular communication with the vessel.

“The vessel is currently running on the starboard engine room at about 8 knots and is making headway to avoid some challenging Southern Ocean weather,” Mr Clark said.

“We are maintaining contact with the families of those on MPV Everest to keep them informed of the situation.”

The cause of the port engine room fire will be investigated by the ship’s owner, Maritime Construction Services (MCS), and relevant shipping and safety regulators.

Wed Apr 7 , 2021
The Victorian coroner has recommended the state government urgently introduce drug testing for the first time, after the deaths of five young men who thought […]